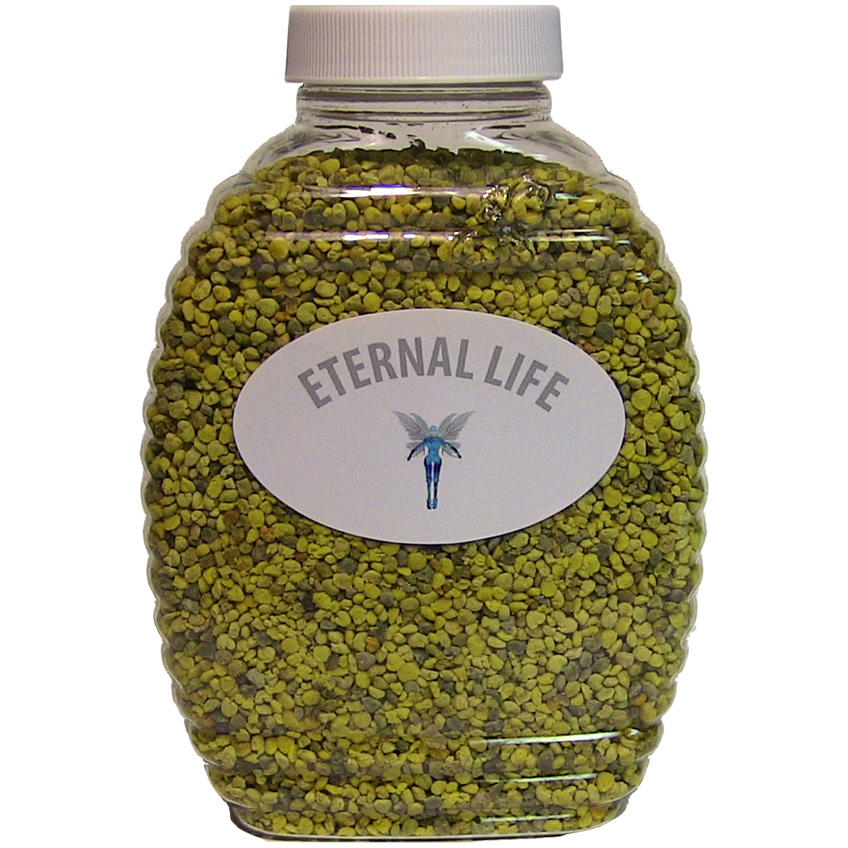 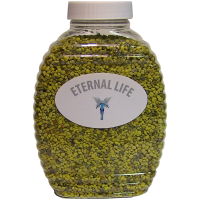 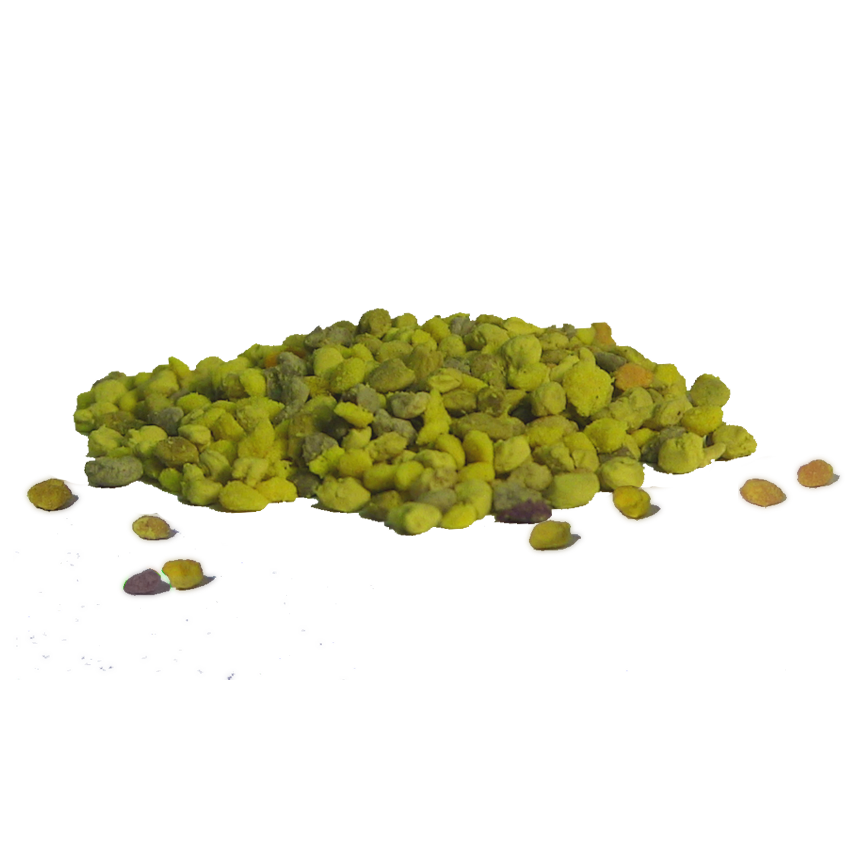 Bee pollen — "ambrosia of the gods" — is widely accepted as a superfood. It has long been associated with improved health and longevity. When it comes to bee pollen, fresh is best. Rutin, probably the most important component of bee pollen, can be lost by 66% in drying. Vitamin B1 can be lost by 93%.

ETERNAL LIFE offers fresh, refrigerated, organic-farm 100% bee pollen for close to the price you pay for some dried bee pollens.

Take bee pollen if you are wanting:

A certain strain of mice has an average lifespan of about 477 days. In the bee pollen experiment, this is how long the control group lived, but the mice fed only bee pollen and water lived so long, and they stopped the experiment after they had outlived the other mice by 123 days, all of which still appeared healthy when the experiment was ended.

Various cultures around the world have a tradition associating bee pollen to those who lived extra long lives. Are these observations correct? In addition to the mice experiments, some researchers have recognized bee pollen as an important food in long-lived regions, but formal scientific experiments have not been conducted.

Bee pollen needs to be free of pesticides. Due to the lack of organic standards when it comes to beekeeping, current use of the word organic is on a trust-based system. Many beekeepers know full well it would not be right for them to use this word for their bee pollen, even if their farm is an organic farm.

A bee will fly as much as 6 miles away to reach a nectar source. We source our bee pollen from a family business at the outskirts of Sacramento, California who we know to be careful with where the bees are able to gather pollen. The farms are organic, and the bees collect the pollen from wildflowers of different types. For this reason the granules will sometimes be an interesting mix of blue, orange, and yellow.

Going from flower to flower, pollen gets stuck to the legs of a bee. The granules form with the addition of nectar and enzymes secreted by the bees. Special attachments are fixed to the entrance to the hive so that when bees enter some of the pollen falls off. When this pollen is gathered, it is fresh.

In the case of this pollen, it then gets refrigerated. When it arrives to us, we store it under refrigeration until it is purchased. After arrival in the mail, it should be kept refrigerated during its use.

Many beekeepers dry their pollen or heat it in an oven, which reduces the water content but allows it to store without refrigeration. Raw pollen must either be fresh or able to be dried with low heat, thus preserving the B vitamins.

When bee pollen is fresh, such as ours, it is raw. There are more active enzymes, vitamins, and bioavailable nutrients than dried pollen. These nutrients are the main reason to take bee pollen, because the therapeutic benefit and assimilation in the body is unparalleled.

Although not all compenents of the pollen will degrade significally, or even at all, anyone seeking bee pollen as a source of B vitamins should especially use fresh bee pollen; the levels are 13 times higher.[1] But even Betacarotene content can be as much as 90% less in dried bee pollen.[2]

If you just look at the amounts of vitamins in bee pollen, it will not look so impressive compared to a synthetic vitamin supplement. Compare 500 mcg of Betacarotene in a serving of bee pollen to several milligrams in a supplement. But bee pollen works much better than even natural sources for many nutrients, because assimilation is unparalleled.

Studies have shown that a very high percent of the nutrients go right into the blood stream from the stomach.

The other major reason to use fresh bee pollen is because dried bee pollen is less trustable. It is more common on the market, easier to buy very cheap, and some companies will mix different cheaper sources to get costs down. Simply put, there is more fraud when it comes to dried pollen, so you are taking an extra risk.

Furthermore, dried pollen stores longer, and because it is dried it isn't obvious when it has been sitting for a year or two. Although the drying process destroys nutrients, this loss was found be in the 15-20% range for Betacarotene and Vitamin E. However, if stored for a year the loss can be as much as 90%.

Fresh and Dried: The Differences

Depending on the drying process, even dried bee pollen can still be an excellent product. If taken in higher quantities it can make up for the lower amounts of some nutrients when compared to fresh.

On the other hand, because fresh pollen contains more water, it necessarily has a lower percentage of protein per gram than dried. Higher quantities of fresh pollen can be taken to make up for that.

In addition to the reasons given earlier, another reason we sell fresh bee pollen is because of the B vitamins. They are easily destroyed by heat and even taking a higher amount of dried pollen does not easily made up for that. There is also a chance that some yet unidentified nutrients are destroyed which are crucial to the longevity benefits of bee pollen.

Fresh bee pollen is the old, traditional way bee pollen was consumed, so in seeking the traditional benefits it makes more sense to stick with what has known to work.

A Closer Look at Vitamin C

Now when we say extremely fresh, we mean extremely fresh. Even after just a week the Vitamin C content will degrade significantly in fresh pollen. So this is rare nutrient where dried will actually have more than fresh. Bee pollen begins drying right after collection, so a dried pollen will almost certainly always have a higher Vitamin C content than a fresh pollen by the time it reaches the consumer. In dried it is often about 3 times higher,[3] but even at three times higher it is not a lot of Vitamin C.

We recommend that people seek additional Vitamin C from a superior source, especially if they are trying to work on collagen, since Vitamin C is important for collagen growth.

Bee pollen was found to support collagen growth. One of the reasons it does this is because it is such a good source of protein, and especially the amino acids proline and hydroxyproline, which both are important in collagen growth. Of that 22% protein content of fresh bee pollen, half of it — 11% of bee pollen — are essential amino acids.

Bee pollen can be an important source of trace minerals, which may be lacking or in very short supply in the diet due to depleted agricultural soils. It is a notable source of Molybdenum, Manganese, and Titanium, and a source for several other important trace minerals.*

One of the most praised nutrients in bee pollen is Rutin, which strengthens capillaries.* Some theorize that this is the primary nutrient behind the longevity benefit. (Rutin is quercetin-3-O-rutinoside, related to quercetin)

But there are other possibilities. Bee pollen is also a good source of the acids RNA and DNA. These acids have been shown to support the health and lifespan of cells, which is thought to slow the aging process.*

Studies have shown that flavonoids play an important role in detoxification. Bee pollen is high in flavonoids, the substances which can give the granules their orange, yellow, or pale blue color. Specifically, there have been studies on bee pollen showing that it is effective helper in detoxification.* Bee pollen helped protect the liver from toxic substances.*

As a Source of Protein

Using bee pollen for a protein source has often been overlooked, but is a very effective strategy. Some people do not assimilate protein well, including those with naturally less stomach acid, or impaired gut health.

If protein is not assimilated well, or if higher amounts of protein are ingested in an attempt to compensate, toxicity can result. Assimilation of protein is extremely important. Increasing your daily bee pollen and reducing the less-tolerated protein sources can help this situation drastically.*

The irony of this is that many, many people have testified that taking bee pollen helps ease their allergies.

If you are sure allergies are not an issue for you, we still suggest you start with a somewhat smaller amount for the first seven days. This is because it is normal and a well known side effect to feel some discomfort in your stomach if you suddenly take a high amount of bee pollen without any adjustment period.

It is not dangerous, but you should understand this or else you might think something is wrong.

40 grams of bee pollen has been shown to be a perfectly safe and effective amount to take, which is about 70 cc. Some experts discourage such a high amount for regular daily consumption, and 1 tablespoon (about 15 cc) is a common daily amount.

We recommend taking a 3 cc scoop two or three times a day (only 6 - 9 cc). It is safe to take all scoops at the same time, but spreading it out in the day allows it to be more effective.

We don't recommend getting more than 2 or 3 bottles at a time, so you can be sure to use them within 5 months. Fresh bee pollen should not be stored for long term, because it has not been properly dried out for that purpose. That being said, it will still keep fresh in excess of these time limits.