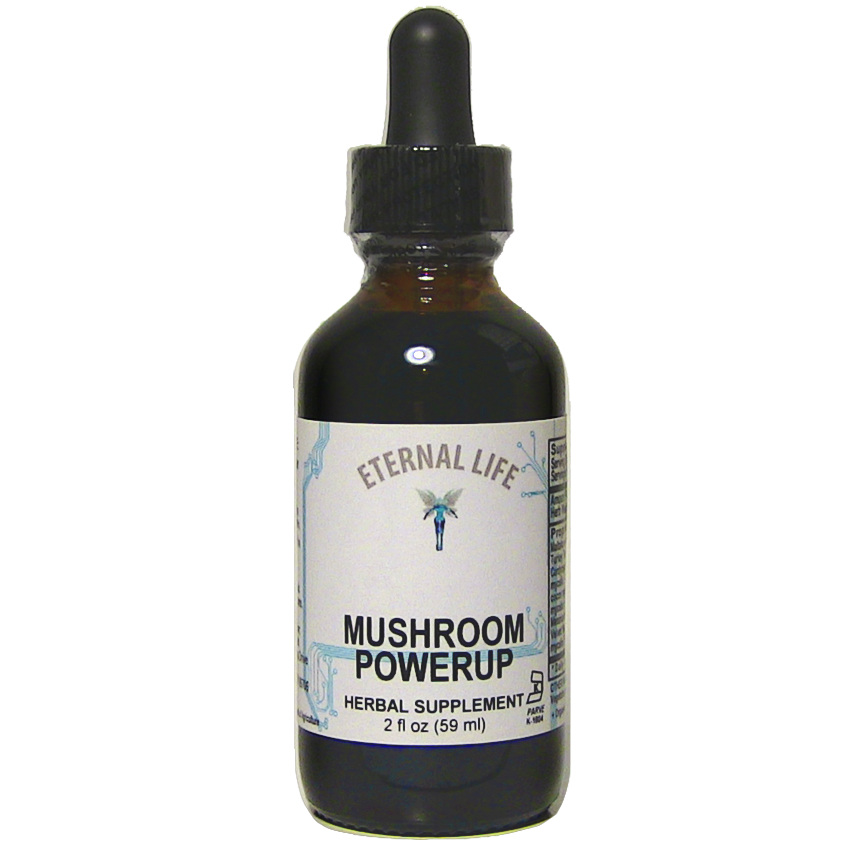 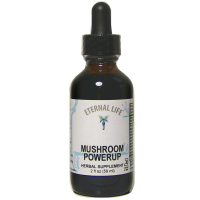 It should go without saying that you can make a more potent mushroom extract at less cost brewing a tea yourself from whole dried mushrooms.

At Eternal Life Club we do this, we fully endorse this, and we sell two mushrooms that we believe promote longevity and are safe for regular tonic use-- Chaga and Reishi.

However, we have a new product that is a perfect companion to mushroom teas, and could work as a replacement if necessary, and it offers distinct advantages.

It is called MUSHROOM POWERUP™.

For just 47 cents a day you can harness the power of 14 of the world's top mushrooms in a concentrated, three-step extraction (hot water, alcohol then removed, and glycerin), fully organic, alcohol-free elixir.†

Convenience is just the beginning. It is of the highest quality, affordable, and contains some powerful benefits that you wont get from mushroom teas.

For anyone who wants to add a more diverse range of mushrooms into their routine, from among the world's top mushrooms, this is the product for them.‡ It may also be of interest to anyone who has been wanting to try a high quality mycelium product because they are interested in discovering the particular benefits of mycelium.

Mycelium is the part of a msuhroom that creates the fruiting body. If you are trying to stick to tradition than you would not be interested in the mycelium in most situations. Throughout history mycelium has mainly been used by mushroom growers, while the fruiting body was the popular thing to harvest and use.

The fruiting body and the mycelium are not altogether different. In general they both have similar properties, but there can be very significant differences as well.

Most research has been done on traditional uses of mushrooms, so mostly on fruiting bodies. The newer research on mycelium is very interesting and it is showing that mycelium have a higher expression of certain factors than fruiting bodies.

A few substances that have been identified and promoted as beneficial in the fruiting bodies, such as beta-glucan, are found to be somewhat lower in the mycelium (usually around a half compared to the fruiting body). It also depends on the cultivar.

In one study on shiitake, they found that beta-glucan is highest in the stipe (stem), next highest in the pileus, and mycelium was third. This was consistent across all cultivars. However, the specific cultivar proved to be far more significant than which part was used.[1]

Substrate is another factor that influences beta-glucan and other components. For mushrooms that are disposed to grow on wood, using a wood or saw dust substrate seems to be best. Mycelium is not always grown on wood, and if you are getting mycelium in a powder form, most of that powder might actually be rice or something else.

What all this means is that for certain applications, gram for gram, mycelium would not be desired and not be as powerful as fruiting bodies. For other applications, it will certainly be found that mycelium is superior, especially concentrated, well prepared mycelium.

The evidence uncovered so far indicates that mycelium may be superior for promoting genetic integrity. More studies are needed, and it is quite possible that mycelium will have a therapeutic use for which the fruiting body is not viable.

The last advantage of MUSHROOM POWERUP™, which is not an advantage really but will be appreciated by those out there who find medicinal mushrooms to be bitter and disgusting, is that mycelium contains less of the terpenes that give mushroom teas their bitter flavor. MUSHROOM POWERUP™ does not contain enough terpenes to give it an obnoxious taste, so it actually has a nice earthy taste that is enjoyable.

Anyone‡ who has been wanting to try a high quality mycelium product, let MUSHROOM POWERUP™ give you a powerup.

The first extraction step is a hot water process which pulls out water soluble compounds over the course of a few days. The material is then pressed and concentrated.

The second step introduces non-GMO alcohol (derived from corn) to extract additional non-water soluble compounds. This process goes for more than 30 days and then the alcohol is almost completely removed. It can legally be called Alcohol-Free at that point.

Last of all, what remains after the alcohol is removed is added to a glycerin base. By this point the glycerin is not likely to contribute much to the extraction process.

MUSHROOM POWERUP™ is not for everyone. There are some individuals who cannot tolerate certain mushrooms and may be better off avoiding all mushrooms. There is a condition called shiitake dermatitis that was found to affect almost 1 out of every 50 people. Even though this condition is mainly resolved by cooking the shiitake, it may not be resolved completely in those who are the most sensitive.

As noted above, the extraction of MUSHROOM POWERUP™ includes a hot water extraction step, but still we advise anyone new to mushrooms to introduce themselves cautiously.

Poria cocos, another mushroom that is part of this formula, is not suitable for pregnant and lactating women due ot the risk it can pose to the baby.